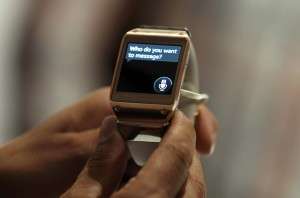 A journalist looks at a Samsung Galaxy Gear smartwatch after its launch at the IFA consumer electronics fair in Berlin, September 4, 2013. The IFA consumer electronics and home appliances fair will open its doors to the public from September 6 till 11 in the German capital. REUTERS/Tobias Schwarz (GERMANY — Tags: BUSINESS TELECOMS SCIENCE TECHNOLOGY)